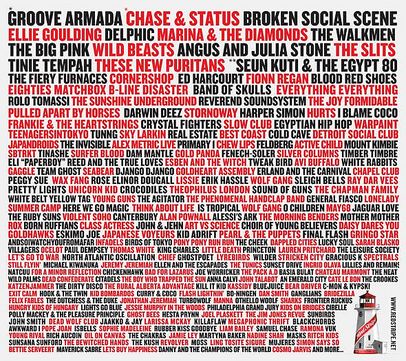 Returning for its fifth year, The Great Escape is now firmly established as a one of the most interesting and important new music festivals with more than 300 bands appearing in a plethora of venues in Brighton across 3 days (13th-15th May). Additionally, it continues to carve out a place as a convention and networking arena, attracting more than 5,000 industry professionals each year to engage in debates fundamental to the industry’s future, as well as offering vital advice to artists, and entertain the music fan at large with stimulating stories and tales.

A full gig list can be found here — with full listings of the showcases on offer, as well as the breakdown of bands by nation down at the bottom of the article. Highlights, however, include indie collective Broken Social Scene, US favourites The Walkmen, local boys Eighties Matchbox, noise-makers Rolo Tomassi as well as zb! favourites The Fiery Furnaces. Classic artists include The Slits and Seun Kuti and the Egypt 80 and recent impressors appear in the form of The Big Pink, Ellie Goulding, Marina and the Diamonds and Wild Beasts. Others to look out for include the comic Darwin Deez, former Pipette Rose Elinor Dougall and Welsh popstress Cate le Bon, but the best thing to do is just go wandering.

This year the industry convention program has moved to the more regal Dome complex and the venue will be hosting panels, discussions, Q&As and networking events — the latter in the huge atrium space. Highlights of this years conference include infamous music journalist Nick Kent and author of “Kill Your Friends” John Niven both being interviewed by The Observer’s Gary Mulholland (both of these talks are held in conjunction with this year’s wider Brighton Festival). Check here for the full programme.

You can find out more information on the festival, the artists, the gigs, the conventions, the talks, the parties and on on and on and to buy tickets all from the official website.

Music From Ireland Showcase featuring General Fiasco and The Chakras

Poland: Indigo Tree, The Car is On Fire and Kamp