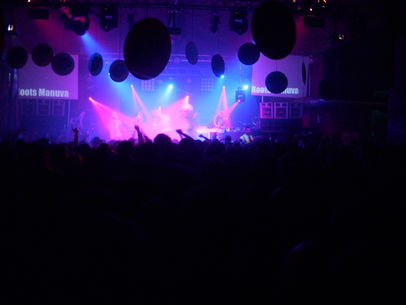 Manchester’s Warehouse Project is known as the premier party venue for the city with line-ups which make even London ravers go green with envy. It’s programme features every dance genre imaginable with the top names from each, and the Ape 3rd birthday brought together some of the best in dubstep, grime, hip hop and drum and bass for another memorable night.

Stepping into the Store Street venue beneath Manchester’s Piccadilly station for what could be the last time before the Project moves to pastures new, the cavernous warehouse was already filling up with partygoers. The Bug’s grime was certainly testing the bass capabilities of the soundsystem to the max, however their MC failed to help a groove settle. It wasn’t until Magnetic Man — presented by dubstep heroes Benga and Skream — took to their laptops that the fun began as Benga launched straight into well-worn hits from his Diary of an Afro Warrior album. Skream did cut in with his own material, however there was no getting away from the fact Benga’s “Night” was the track a lot of people had come to hear from this set, and arms when flailing into the air on cue.

The excitement continued with headline act Roots Manuva taking to the stage, all set to give his new album Slime and Reason an airing. However, a poor sound test meant it was hard to distinguish much of the music and it wasn’t long before I abandoned the performance to seek out the new second room of music providing variety to proceedings. There Virus Syndicate had worked the crowd into so much of a frenzy it was becoming a bit of a sweatbox but everyone was loving the small, intimate space compared to the vast main area.

Boxcutter’s performance was evidence of his skills not just as a dubstep producer but also as a live artist.

!(feature_r)http://relayer.s3.amazonaws.com/articles/spreads/4c9649aac1531723a0000262.jpg!If Roots Manuva was disappointing, the next act on in the second room more than made up for it: Boxcutter’s performance was evidence of his skills not just as a dubstep producer but also as a live artist, throwing in techno tunes among his beefy tracks such as “Grub” and “Ritka”. It was a sterling show of strength for the often neglected talent from Northern Ireland, and the highlight of the night. Breakbeat maestro Krafty Kuts played a set of hits in the main room, then the night turned to drum and bass with Marcus Intalex, High Contrast and Shy FX putting on sets which didn’t let anyone pause for breathe.

With the Store Street venue packed to the rafters once more, Warehouse Project seems set for another successful series of events and the addition of the second room injects an little variety into the mix too. The plastic patio furniture has also been replaced by picnic tables and deck chairs for added comfort away from the dancefloor, which is a fine idea. If you’re in Manchester one weekend between now and new year, be sure to try to get your hands on a ticket to a Warehouse Project party — it won’t be easy but it’ll be well worth it!